Hero Blaze is a mobile RPG Free-to-play-to-earn game on the Binance Chain. Created by Natris as one of the first mobile P2E games in Korea, it was an immediate success when it was launched. The team is now getting ready to launch their game in Asia, Europe, and in North and South America. Let’s learn more about the project and how to get started.

Hero Blaze features a fantasy world where players enjoy collecting and training hundreds of generals through different systems such as general summoning, combination and promotion, equipment upgrades, and more. Trained generals then help players form formidable teams through formation effects, team combination, and general skills to compete strategically in the game environment or with other players.

There are more than 200 generals with different unique skills that players collect through gameplay rewards, summoning, and combinations to create unique strategies. Generals are trained and leveled by collecting EXP Books, general fragments, and skill upgrade stones, upgrading equipment through the Blacksmith, and equipping them. Different gameplays such as PVP & PVE, Alliances, and Mission & Events create an always interesting, progressive ecosystem.

The Play-and-Earn system is established via MUDOL Stones, the in-game currency, and $MUDOL2, the utility token. Players earn MUDOL Stones and can exchange them for $MUDOL2 and vice versa. $MUDOL2 is trading on centralized exchanges are staked to earn vMUDOL for voting rights.

Players use MUDOL Stones in-game to purchase precious items and enter various contests for more rewards. Every day at 0:00 (KST, UTC+9), accumulated MUDOL Stones used in the game are converted to $MUDOL2, where 47.5% of those are distributed to vMUDOL holders staked $MUDOL2 as a reward. Another 47.5% is added back to the P2E pool for players, and the remaining 5% is burnt forever.

How to play and earn in Hero Blaze?

To start playing Hero Blaze, all players will have to do is download the app from the Apple App store or Google Play (Pre-registration Ongoing for global launch).

Also, since the P2E platform is built on the Binance chain, players will need to set up a Binance chain wallet to interact with the platform and access their $MUDOL2 tokens.

NOTE – $BNB (BEP-20 smart chain) is the native token on the Binance chain. Therefore, players need to always have even a small amount in their wallet to pay the gas fee required for interaction.

MUDOL Stones can be earned in different ways. Simply by playing the game and having fun, players can earn MUDOL Stones through different content in the game. 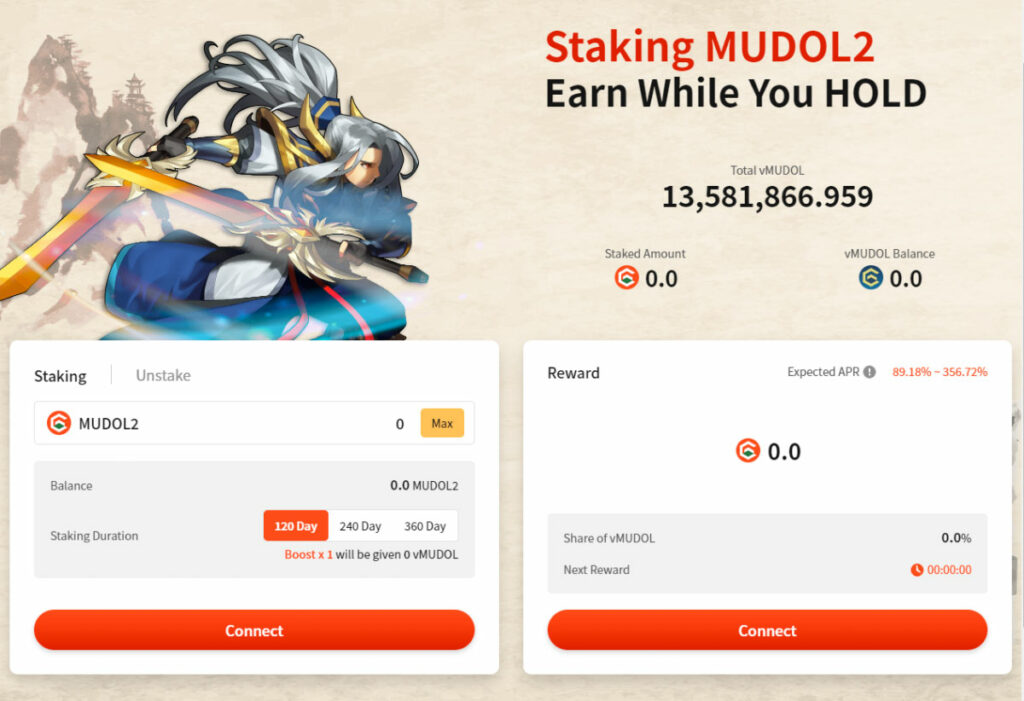 Staking $MUDOL2 will give players vMUDOL. MUDOL Stones used in the game daily is exchanged for $MUDOL2, and 47.5% of that is distributed to stakers based on how much vMUDOL they have.

$MUDOL2 can either be staked for 120 days, 240 days, or 360 days. Players earn vMUDOL and $MUDOL2 during their selected staking duration. Once the staking period ends, vMODUL earned is burnt, and the staked $MUDOL2 is returned.

From constant minor updates and upgrades of the gameplay mechanics for smooth interaction to major changes and additions that’ll ensure a long-lasting and sustainable ecosystem, Hero Blaze is always growing.

Hero Blaze: Three Kingdom is set to expand its service area to Japan, Hong Kong, Taiwan, Macau, Europe, South America, and North America as well. Hero Blaze is already in service in Korea and other Asian countries such as Vietnam and the Philippines.

After setting a record, claiming the top spot during its initial launch on the Apple Appstore and Google Play, they look to repeat the same feat with the Global launch.

Hero Blaze is about to set a new precedent as one of the few projects making the transition into crypto as easy as possible. Pre-registration is currently ongoing and accompanied by a reward event, which will surely bring on lots of non-crypto users (i.e., loyal, hardcore gamers).

Take a little time to explore and learn more about how Hero Blaze is not only creating a fun and progressive gaming ecosystem but also a sustainable one, which is where most play-to-earn games fail. Have a look at the official website and follow the project on Twitter to get all the latest info.